A downloadable game for Windows, macOS, and Android

Does chewing loudly justify sending someone to hell? What about leaving passive-aggressive Post-It notes for your flatmates?

Swipe left and right to decide who goes to which afterlife. Careful though -- send souls to the wrong place and heaven and hell will begin to run out of space as management on either side slows down to deal with the incorrect entries. Also, you'll get some pretty rude texts from the custodians on either side.

Grimder is a Ludum Dare gamejam play on dating apps. With the theme “running out of space” we came up with the idea that Heaven and Hell have a capacity limit which fills up quickly if the wrong people are assigned to each place. You play as Death, swiping left and right to send characters to hell or heaven based on their traits. It was our team's first LD game -- we took it chill and had a lot of fun, putting in about 5 hours per person per day.

This game was super cathartic to make, as most of the things that send people to hell are actually just our own pet peeves. Thanks also to our mates on Twitter that supplied us with a bunch of ideas for virtues and vices! You can find the thread here: https://twitter.com/callioperyder/status/1028142046727483392

Special thanks to Chris Hodgson for sound and voiceover @chrishodgson99

its unable to play on mac:(

I just finished downloading it to my phone. I'll edit this comment after playing! brb!

We really enjoyed playing & discussing Grimder on Indie Game Club (it’s like a book club for indie games)! You can watch it here:

Keep up with Indie Game Club from POTIONS & PIXELS here:

I ACCIDENTALLY SENT A WOMAN WHO

well, she baked mean cookies. who knows what havoc they caused on Earth

I absolutely love this game! This takes up all of my time thank you!

this is gonna sound stupid but i

you click on the game files and boom you are in

i've clicked on everything in the folders and nothing happens

Same, I downloaded the game files for mac and I just see 3 folders and no way to run the game

add it to ur collection then install/buy it

I am super late to the party, but this game was a lot of fun, so I felt like sharing this. Hope you all enjoy!

Does anyone know to to make this fullsccreen? I've tried everything but nothing seems to work.

This was a cool idea and i likd it, for the first 8 minutes, i loved lakia, that was awesome, but if you kick a dog you go straight to hell no matter what, but it was a good game just needs expanding

Haha love the concept. Btw, if you kick a dog without anyone looking you should go to HELL! otherwise cool concept! Are you thinking of putting fake ccharacters? This can trick the player.

Please make it in browser playable.

My game won't start what do I do

Pretty fun! Discovered this after GrayStillPlays posted a video of it today.

Not a whole lot of souls to sort and I got a lot of people doubling up on bio traits, but overall it's a pretty good game. I especially liked the inclusion of NB people, and the texts from Lucifer and God were hilarious. I did find correctly choosing where to send someone a little difficult, as they're kind of subjective, but I think that makes the game more fun. I sent you to hell correctly, but was that for the minion memes or for drunk driving? Could be either really!

I played it on my PC, but it seems much better suited for mobile, so I'll definitely try that next with the apk file. I think this would be a fun and short time waster if you're in a waiting room or something.

Well, what do you do with Laika (the dog)?

Ya ever hear the phrase "all dogs go to heaven"?

There's alot of pet peeves but no one actually commits a crime. There arent any actual evil people in the game. They all just commit someone in particular's pet peeve. SO I damning someone to Hell or sending people to heaven seems a bit extreme. Just sayin, plus there's no opening saying that you were hired to do this. It just comes off as if this is Grim's version of Tinder only this is how he judges on where he sends people. It feels a lil....off.

"no one actually commits a crime"

Actually a few of the things listed were being a drunk driver or 'hit and run'ning on pets, or abusing (kicking) them.

Played your game and found it fun. Sorry if I got the pronunciation of the title wrong - I think it can be taken in different ways, lol... Thanks for making it:

Reply
A G Moody3 years ago

charming and cute! I loved all the little pet peeves listed for each of them-sending people to hell for reclining seats on planes added a few years to my life.

Really like this game, the texts you get when you misplace people are really funny, replayed it just to see how many I could get wrong for those texts lol

Reply
The Cinnamon Synonym3 years ago

Judge, Jury, and Executioner: All in one convenient app!

This was a very fun and amusing little game. Great job to the developers!

Thank you! We all had a fun time making it as well

Would love to see a mobile version of this.. with a lot more to it! I'm sure you could think of loads more sins and good things to put in there :D

Maybe one day we'll do that!

I can't understand how to play this game... I downloaded it but I don't know what to do know! I'm sorry, I'm a newbie.

Read the description of each person, and choose whether they should go to hell (swipe left) or go to heaven (swipe right).  God/Satan will let you know if you did the right thing. Try and make sure you don't fill up one of the queues!

Cute! I sent a gamergator to hell tho and Satan wasn't happy. That's fair though I suppose nobody would be.

Wow dude (also I think you meant made)

Does this have a Apple version?

This is absolutely amazing!

It is another Papers, Please of the Judgement Day with a touch of simplicity, ridiculous review for the candidates of heathen, and "constructive" nagging from both sides of powerful invisible beings :'D

Just hoping it has more levels to play and variable screen adjustments when playing in Windows computer...

the way the game is, its extremely difficult for me to play

We would like to, but currently don't have a mac to build it. Sorry!

Helllllooooo i played your game drunk for my channel with my friend!

Loved it, very addictive. Not sure I make a good grim reaper though.

very good, it would be cool if this could be developed further

Since it was a Ludum Dare game, it probably won't be. But I'll definitely be participating in the next LD as well, so there'll be another game up at the end of November

Will try porting to HTML5/WebGL, hopefully that'll make it playable for you!

Thank you for a fun little game, great for a few funny moments. With a few tweeks I think it could be even better, e.g. perhaps some background music and perhaps death could be a little less vocal. Here's a let's play if you are interested:

yeah, this is bad. "uhhhhhhng" every 2 seconds makes it worse lol

turn off your volume... 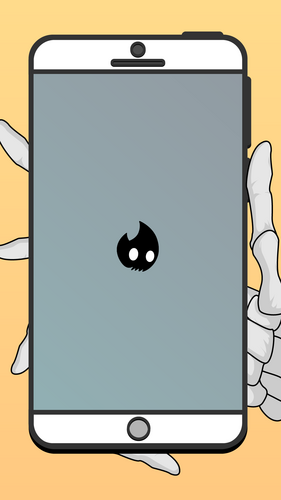 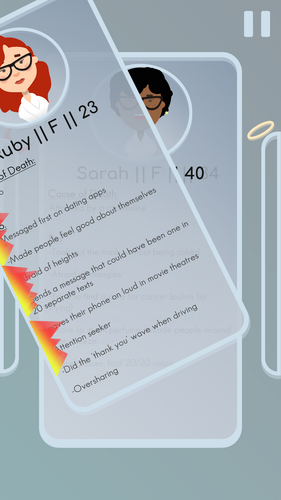 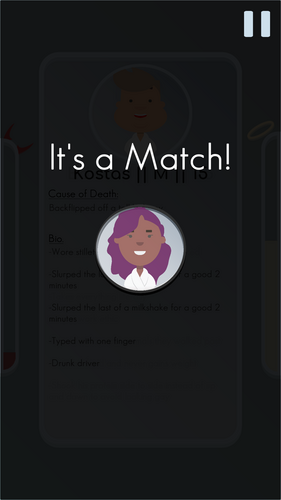 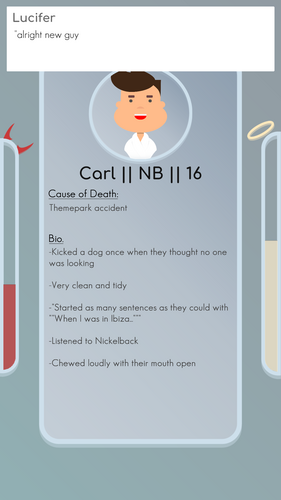